1795 - A rare Pattern Book for Designers in Hair

TERRY, Garnet. A Complete Round of Cyphers for the Use of Engravers, Painters, Sculptors, Jewellers, Hair Workers, Enamellers, Pattern-Drawers, &c. Consisting of six hundred examples for the forming of cyphers of every denomination. Designed and engraved by Garnet Terry. Engraved title-page with vignette, 25 plates of cyphers (numbered 2-26), and one unnumbered plate of coronets. A rather dusty copy, especially to the title-page and the final plate. Although there are some other marks the plates are generally clean. Contemporary calf backed marbled boards. The boards are rubbed and worn, but the backstrip and joints are sound. 4to. printed for the Proprietors Bowles & Carver. No. 69 St Paul’s Church Yard. Just published Terrys Allegorical Hair Devices containing 200 elegant subjects, Price 7s. 6d. c1795. ESTC T162628, 3 copies only, Cambridge; UCLA and Yale. This is only the second copy I have seen, the last one (now at Yale Center for British Art) was sold some 15 years ago. ~ A rare and unusual pattern book of particular use to ‘hair workers’ - for whom Terry also announces on the title-page his recently published work, ‘Allegorical Hair Devices’. Advertisements for jewellery with devices, mottoes, and cyphers, incorporating hair, began to proliferate, especially in America, in the later 18th century. For example, in 1793 Samuel Folwell of Philadelphia advertised that he would instruct his students in “that curious Art of working Devices in human Hair, in which he has long had professional Practice in this City...and those who discover a natural Propensity to this polite Art, no Attention shall be wanting, to enable them to delineate Nature in every striking Form.” The use of hair in jewellery was almost like a relic, and the incorporation of a cypher would have been an essential feature of such a personal memento. Garnet Terry (1744-1817), testified as a witness in an Old Bailey trial in 1776, and again as an expert witness at a number of trials for forgery between 1798 and 1805, stating in 1799 that 'I am the engraver employed by the Governor and Company of the Bank of England, I engrave the plates for the one and two pound notes'. He also published a number of satirical prints in the 1770's. 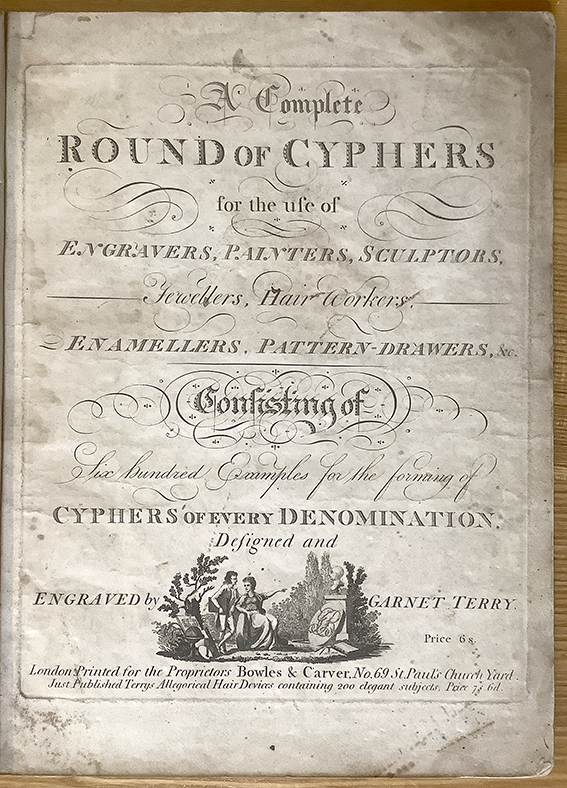