BUSFIELD FAMILY Archive of the Busfield Family of Bingley, Yorkshire. Manuscript, 1766 - 1846. 1. Household Accounts 1766 – 1773. Detailed accounts for a comfortable country household itemising income expenditure. The income is a mixture of rental income, payment for hay, and occasional references to ‘attending’ various persons and expenses for a nurse. This would lead us to believe that the compiler was a medical man although the number of patients seem sparse and he is constantly borrowing money from “Mother Kennion, £60 [possibly his mother in law, as the name is frequently repeated]” “my wife £15 8s” “Mr Hoyle £9 5s” etc. His expenses were not inconsiderable, mostly to tradesmen, but also includes book binding [13s], wife’s monthly allowance [£10 10s], malt [£7 7s], loss at cards [6s]. In August 1769 he pays £2510 to Mr Leach for the Morton Estate; the source of the funds is unclear although there is a gap in the accounts from 1766 – June 1769. Loosely inserted is a hand-written To Let notice for Glen Morton Farm, possibly as instruction for printing. Loose letters and accounts inserted. 2. Household Accounts of Johnson Atkinson Busfield 1773 – 1792. 3. Household Accounts of Johnson Atkinson Busfield 1778 – 1795. Includes records of repayments of loans to his mother in law Mother Atkinson, from whom he must have borrowed a substantial sum. [Johnson Atkinson Busfield, 1739 – 1817] 4. House Book of Expenses of Johnson Atkinson Busfield snr. 1802 – 1812. The gap in Busfield seniors accounts from the previous book 1795 to this one where a number of pages have been removed were “…probably destroyed intentionally on account of the particulars it would have disclosed of my grandfather’s unfortunate debts. J.A. Busfield Dec 8 1873.” Note to front of volume. 5. Household Accounts. 1796 – 1843. John Atkinson snr died in 1817 and was succeeded by his son John Atkinson Busfield jnr. [1775 – 1849]. By 1802 the father was known to have been in severe debt, a loose folio sheet lists John senior’s debts as at June 1802 with a list of mortgages totalling £37,100 and bonds and other securities bringing the total to over £55,000. The same sheet shows repayments [probably by John junior] starting in 1802, with a gradually reducing debt until the final payment in 1825, though most were made between 1802 and 1809. 6. Rental Book. Large Folio, c. 73 pages completed. Recording rents from 1801 – 1846. 7. Account book of Caroline Busfield. January 1825 – 1839. The ordinary household accounts of a comfortable country wife detailing the minutiae of daily life in the house. She was wealthy enough to pay and annual subscription of £10 10s to York Minster, as well as butcher’s bills of over £15, 10 geese at 3s 8d each, chickens at 10½d each. 8. Busfield Farm Account Book. 1808 – 12. A record of farm activities and costs. Includes wages, mole traps, feed, animals; income from sale of animals [mostly sheep and pigs], 9. William Busfield’s Farming Book. 1832 – 39. Accounts for the farm recording income and expenditure. 10. Also included is a large quantity of loose printed and manuscript ephemera, various dates, including letters, bills, accounts, recipes, receipts, agreements, posters. Approximately 80 pieces. A fascinating archive of a family’s accounts through three generations from c. 1766 - c. 1846; 9 substantial volumes plus a large quantity of loose material which would bear further research. The Busfield family were quite prominent in the Bingley area having rectors, J.P.s and local antiquaries and historians in their number 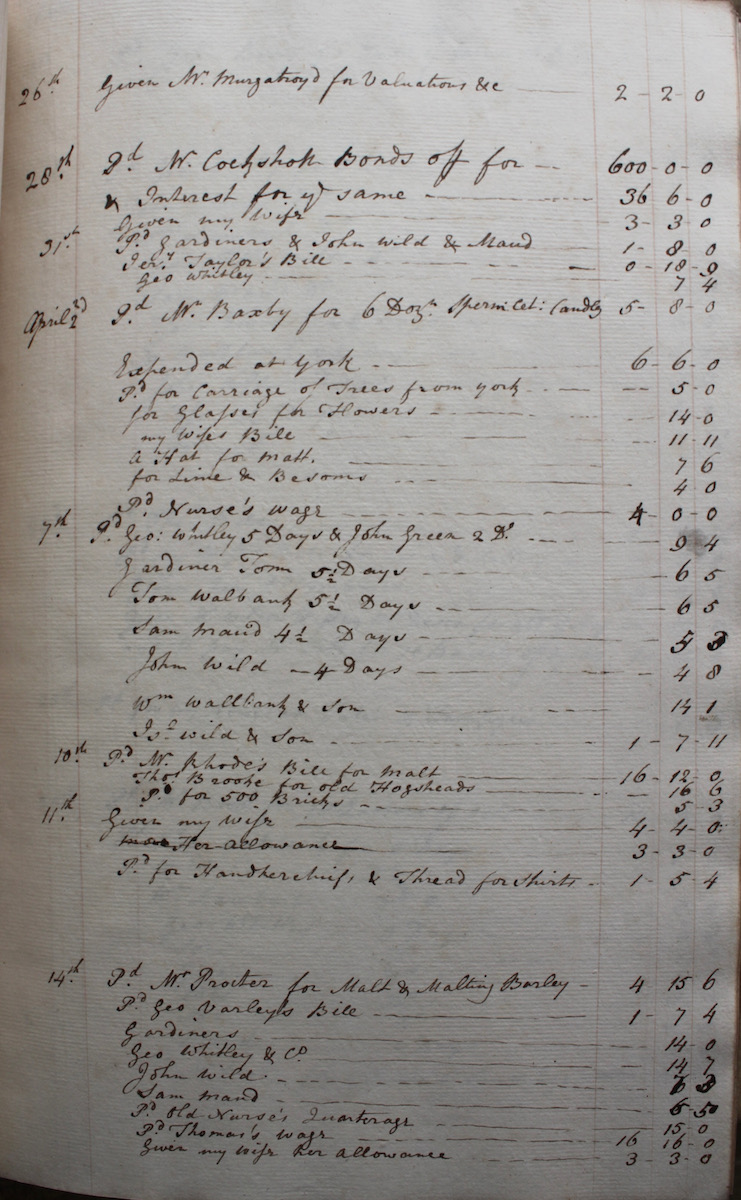 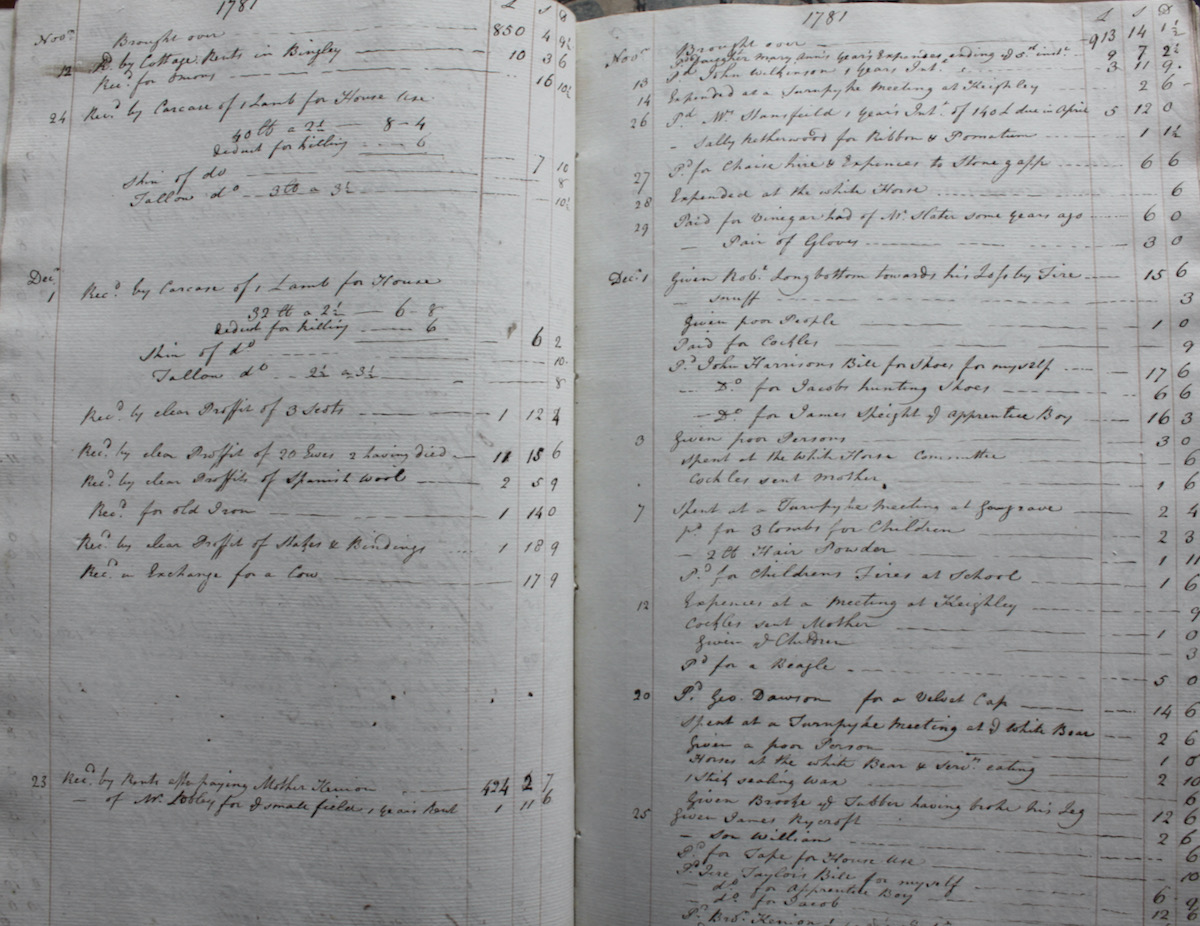 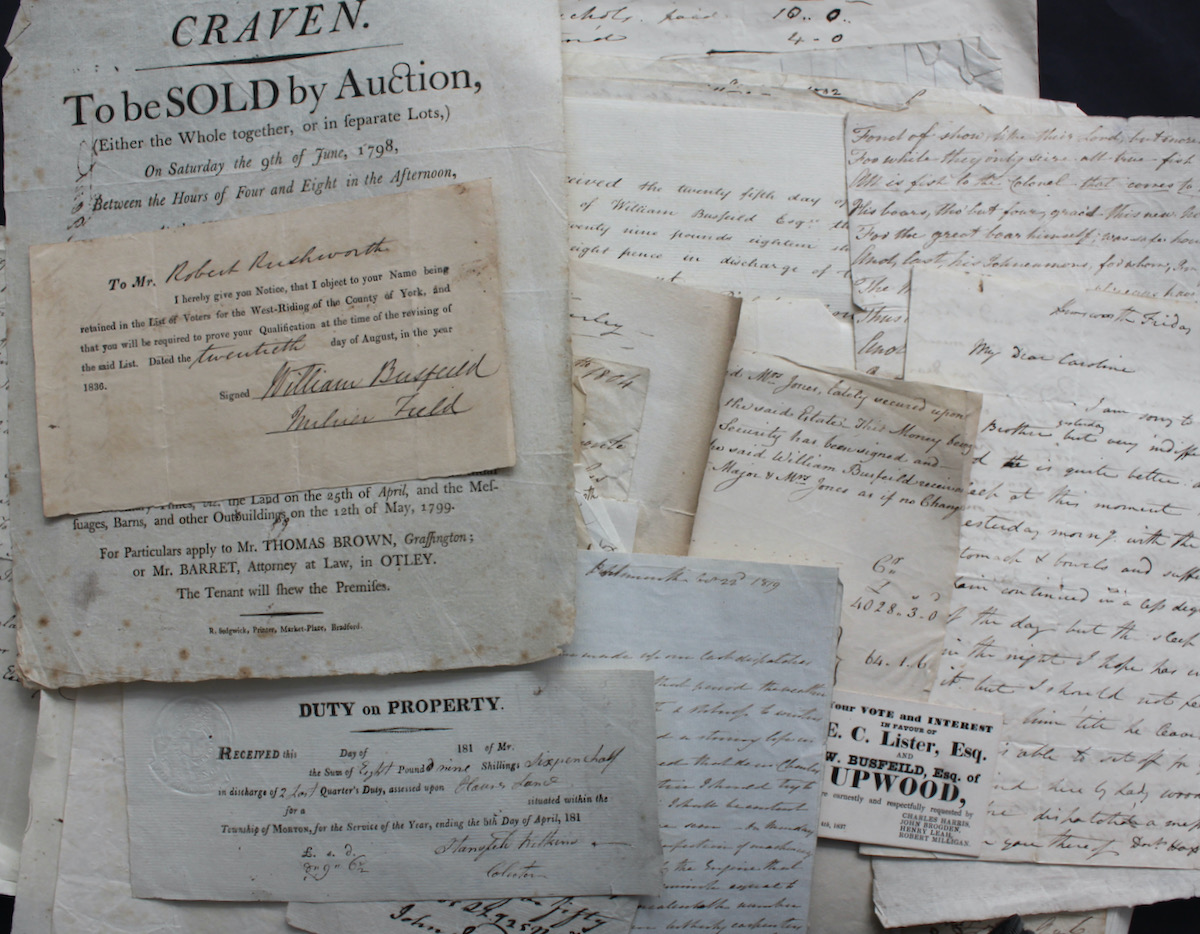