Two Conjugate Leaves from the First Edition of the Bishops’ Bible, printed by Richard Jugge, London 1568, Presented as a Keepsake in Honor of Mrs Margaret Bridwell Bowdle and the Directors of the Bri

This keepsake was produced in an edition of 220 copies [this one being “out of series”] under the direction of William Richard Chiles and Fallon Snyder. It is presented in a slipcase; the marbled paper covers for this were prepared by Horace Teddlie and the designs on the covers were taken from the watermarks used in the paper on which the first Bishops’ Bible was printed. Contents: two conjugate leaves containing parts of “Judge” which are placed within a folder sewn into the book; followed by three articles, titled “The Bishops’ Bible, 1568”, “Matthew Parker and Old Symeon” and “Bridwell Library September 27, 1973”; a memoriam page: “In Memory of Those Whose Lives were Related to the Growth and Development of Bridwell Library” and a list of the Bridwell Library’s supporters. 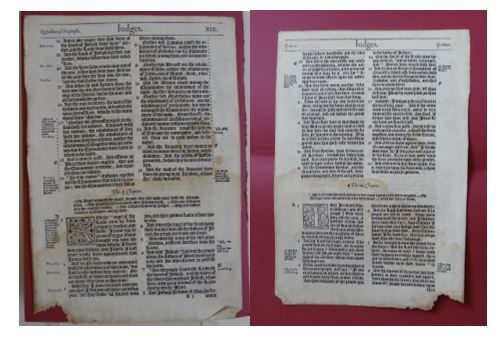 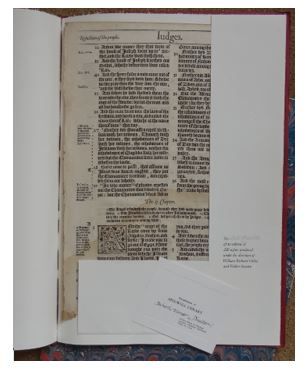